Working on this re-edit of our 1986 music video for "I Wonder" was a surreal experience... particularly the dummy attack that happens midway through...

I was getting a real Zapruder film vibe working on this - watching a rabid ventriloquist doll go on a killing spree (in slow motion) and feeling the need to "liberate us" from our spleens... chilling, to say the least... "Back, and to the left.... back, and to the left" - 35 years ago and the footage still makes your hairs stand up on end.

But here it is, with all it's charming little "add ons"... the Batman TV-series word balloons that pop up to emphasize the horrors unfolding before your eyes... the behind the scenes photographs of Lloyd directing the shoot, and going over with Jerry - his "motivation"... and or course, that chilling newspaper story, which only gives you a fleeting glimpse of what really happened that hot, summer day.

The fainting and stumbling at the end of the video were all too real - after prancing, which turned into leaping, which accelerated into running (you'll see why) was too much for us - and by the video's end you can see it take it's course on all of us. For Jerry, it was like shooting fish in a barrel. 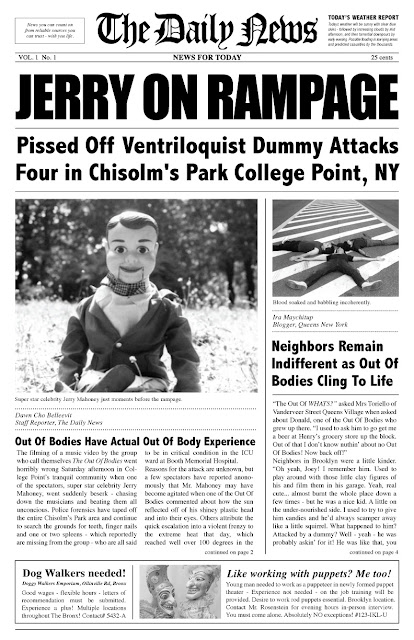