I've never asked my nephew Andrew about the name of that band he's in, and he's never asked about the Out Of Bodies. It's probably best that way, not to get up all in his business and one thing he doesn't need to hear about is some old hippy dippy band that "might've" existed in the 90s before his wisdom teeth came in. But he's a clever kid so I think I'm safe to assume "The Royds" may be a loose reference to meteoroids, his band's logo being of one hurling towards a dinosaur... perhaps suggesting some heady awareness that, like the dinosaurs, we're all just a meteor away from being extinct. Perhaps it's also a statement of the types of musicians they're influenced by - the old timers from a different era such as The Beatles, Hendrix, Clapton and so on...

Then there's that other theory I have that The Royds simply refer to hemorrhoids...

Made temporarily semi-homeless by Hurricane Sandy a month ago my wife Lori and I (and our two cats) were taken in by my brother Paul and his lovely wife Joan, while we waited out the storm with their two boys Douglas and Andrew. It was sometime during our stay when I spontaneously asked Andrew to play "anything from the Nightmare Before Christmas" - I thought I was throwing him an impossible curve ball - he answered with a few chords from "Sally's Song" which I began to sing. Then it got awkward and we both decided to stop before it got any worse.

This might've been the most interaction between a member of The Royds and a former member of the Out Of Bodies - as the most I'd usually get when visiting would be a nod and a mumble ("howzitgoinn...") and it's off he goes with a few friends down into the basement - only to be followed by these sounds emanating through the kitchen floor. It does me proud to see that unlike the fellas I know, these guys may actually go somewhere - - so please check out my nephew's band and tell him The Out Of Bodies sent you...

This is something I forgot about until Joey posted it to his Facebook page... it's worth millions on eBay now!! 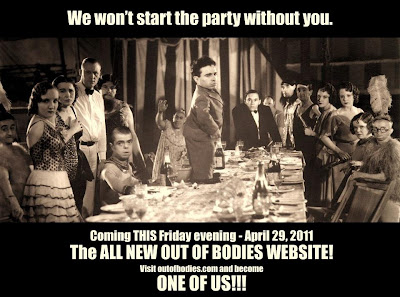 Dan and Joe clowning around - borrowing from a favorite Odd Couple episode...

Submitted to the OOB Blog by Mark! Thanks, buddy!!
Posted by Out Of Bodies at 11:34 AM 0 comments

It's all fur and zippers with you, ain't it, Joey? 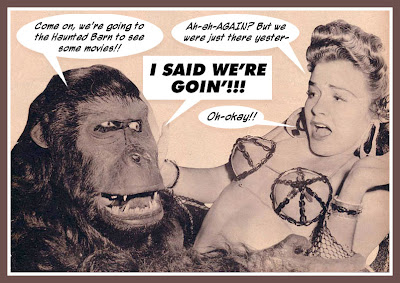 Read all about how Things go Haywire at Joey's place!
Posted by Out Of Bodies at 11:32 PM 0 comments

Out Of Bodies Joey goes Haywire!


Our Out Of Bodies brother Joey is in the local papers again!! This time not for his mobile "Movies To Go" events, or his Monroe vicinity monster movie and memorabilia museum, "The Haunted Barn" - but for his upcoming involvement with an independent film company and their horror/sci-fi web series, "Haywire"! One of Haywire's producers, fellow Monroe resident Scott Klein, put an add in the paper seeking local businesses looking for exposure and wanting to be a part of the series. One of the first to answer the call was Joe - who evidently has recovered somewhat from another potentially life-changing opportunity he answered a long time ago! Hopefully we'll be seeing more of Joe in the upcoming months!

Remember Adventurer's Inn? That surreal, almost dreamlike amusement park (now long gone) that still resides in the subconscious minds of many who have been there? Well, the OOBs do - and here are some remembrances culled from the Out Of Bodies archives - set in motion by Donald's dentist when he innocently commented...

"what a well done website!
a tribute to a better(?) time. does anyone remember golf city and adventurer's inn?
- toothman68

Lloyd remembers:
Adventurer's Inn was one of my favorite places in the world! My grandmother used to live in the apartment buildings right around the corner from AI, and she used to bring me there all the time. When I was in elementary school I had many a birthday party there (remember Don?!). As I got older, Adventurer's Inn grew with me! They kept expanding - from a kiddie park to a full blown amusement park (I believe they got a lot of their later attractions from New Jersey's Palisades Park, which closed around the time they expanded). Later, after High School, long after the amusement park was shut down, Don and I would go to the arcade at night and play Popeye and Indiana Jones and the Temple of Doom! We got so good at the Popeye Arcade Game that we could play all night long on one quarter!


Donald remembers:
Although the rides and restaurant closed around 1978 or so, the arcade remained open for at least another 10 years or so, I believe - and even though the concrete landing at the top of the arcade entrance way was sinking, and the circular mosaic design of the Adventurer's Inn Pirate was nearly obscured in a perpetual puddle of water - I can still remember visiting this place with fondness. I do actually recall at least one of Lloyd's birthday parties there, when the park and the rides were open - and regarding Lloyd as some type of celebrity. But the longest amount of time I've spent there in one stretch was in 1985 when the union at the company I had just started working for went on strike for three long months. I couldn't have been too worried... Instead of walking picket lines I spent much of that time plunking quarters at the arcade, being I lived just moments away in College Point. By the end of the strike I was a Popeye/Indiana Jones Master. I also vividly recall (much to my horror) one of the long term employees at the arcade who you'd get your quarters from. Lloyd and I nicknamed him "Quasi" (for his uncanny resemblance to Quasimoto). With his change belt straining around his enormous girth, Quasi would be the guy we'd have to contend with before playing our favorite video games. With our hands extended we'd patiently wait - as he'd pinch out one quarter at a time. This up close encounter was horrifying. Quasi's one eye would leer down at his belt, while the other was fixed on us. He would never speak, but his breathing would be loud and laborious. It took us every ounce of courage not to forget the whole deal and bolt for the doors.

Joe remembers:
Yeah, Adventurer's Inn was quite a place in the mid seventies, and you guys are right, it started to go downhill from there. Many of the rides, as Lloyd states, were leftovers from Palisades Park, but some were also from Coney Island and the garbage cans around the place were from the 1964 World's Fair, right down the road in fact!! I remember in it's later incarnation as an arcade, walking through with friends dressed in full ape make up and freaking out all the little kids!!!! The bad thing I remember is that giant cat-sized rats use to chase us back to the car when we left. Not fun!!! Regards to my old friend and fellow film guy Lloyd Goldfine, who, as a young zombie tried to kill me!!! 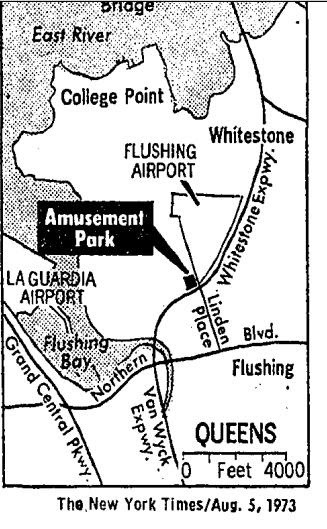