Down In The Lunchroom 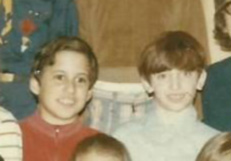 The other day I was rummaging through the OOB archives for something when a random piece of yellowed loose leaf paper, neatly folded in fours, slipped out of the pages of some composition notebook and dropped onto the carpeting. "What's this?" I asked myself. And seeing that there was no one else there to answer me I decided to open it and see for myself.

Dated February 8, 1983 - it was a hand-written true account of something that had happened about 13 years even earlier than that! A cherished Elementary School memory saved to paper - written by Lloyd - chronicling a day when he and I were mere 3rd graders attending Public School 135. Lloyd always had a great memory for such things - much better than myself - and reading it again brought it all back to me as if it had happened yesterday - except it happened 50 years ago!

It reveals a snap-shot in time... the thoughts of two young boys not even ten years old... it very well might be the earliest written account of anything pertaining to our childhood - ever! It's a piece of our history, I suppose - and being such it might not make a lot of sense outside of the two of us - but I hope it's entertaining just the same! So let's all go back 50 years and see what Lloyd and Donald were up to...


...Down In The Lunchroom


I don't really remember why, but Don and I were down in the lunchroom, and except for us, the place was empty. I was doing' Mrs. Glaser impressions (nervously looking over my shoulder after each performance) and Donald was giggling (we used to "giggle"). But we weren't there just to make fun of mean ole, fat ole Mrs. Glaser - no sir! We were third graders! We was on serious business. A "mission" you might say.

I didn't really know why we were there, but Don did (and that was good enuff for me!) So we fooled around (a little tap dance on the table - a pantomime vomit because of the hot lunch...) while we waited for our "contact".

It was a girl. Not just any girl though - it was a real ugly girl. It was a real yucky girl. The yuckiest girl in the school... Hermione Galumph!* (Blechhh!)

But, like I said, we was on important business! (What else would keep us in the lunchroom alone with Hermione (yuck) Galumph?

She "schlepped" in from Stairway 6. She was wearing an extremely wrinkled shirt and an old lady sweater that was missing most of the buttons. And, though I really don't recall clearly, it's pretty fair to guess to say that she had a fairly large bubble of snot hanging from either nostril. But, the most important detail, and the reason we were there, was the large shopping bag she lugged along behind her. 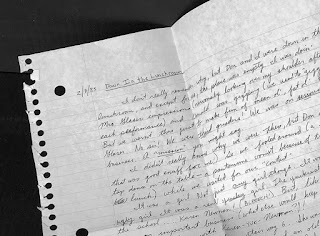 I was surprised (actually shocked, horrified and repulsed) at Hermione Galumph's sudden appearance, but Don handled it matter-of-factly. Except for a slight involuntary shudder, one might have thought that Don was talking to a real human, instead of the mockery that shambled towards him!

We gave a cordial wave. I was behind him, sitting at a lunch table. He sat next to me as Hermione Galumph drew closer. I also shuddered.

"Let's see it", Don said, getting right down to business. We didn't have much time - lunch time would be starting soon and the room would fill up. "I have two" said Hermione Galumph, her voice a throaty honk. "Two?" I asked myself. "Two of WHAT?.... I don't think I want to see this."

"Let's see", said Donald, a bit impatient. I was beginning to have second thoughts about Don. I was almost definitely sure that I did not want to see anything that Hermione Galumph had TWO of! But, before I could protest, she exposed them! She thrust her arms into the shopping bags and - - I covered my eyes for a second! 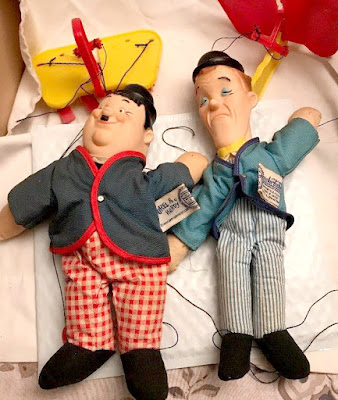 They were Laurel and Hardy push button marionettes! The first push button marionettes ever to enter our lives! I acted nice to Hermione Galumph and she let me play with Skinny. Don was already playing with Fatty (Hermione Galumph LIKED Don) and it was kind of appropriate that he would end up with Fatty and I would end up with Skinny. I made my marionette run up the tables and then fall off the edge - it was great fun!

Other kids began to trickle into the lunchroom, so Don and I helped Hermione Galumph put the push-button marionettes away, being careful not to tangle the strings.

The rest is history!

There is no way to explain the aforementioned Soupy. This is, without perhaps, opening up a whole 'nother Pandora's Box and raising all SORTS of questions - one of them being, and certainly NOT limited to, "what the hell was WRONG with those kids?" So let's just say, yeah - okay - we played with puppets - what 3rd grader didn't. Oh you didn't? Well - okay - let's just say THESE two kids did and leave it at that. Let's not get into what sort of personalities they projected into these puppets and who did what to who. After all we're not here to judge, are we? Yes - yes - let's just move along. Shall we? AHEM!!!...