After a visitor to our website mentioned that The Out Of Bodies "I Wonder" sounded much like a Donovan song, Dan created this... ENJOY!!


The Outofbodies - I Wonder REMIX from Dan Ban on Vimeo. 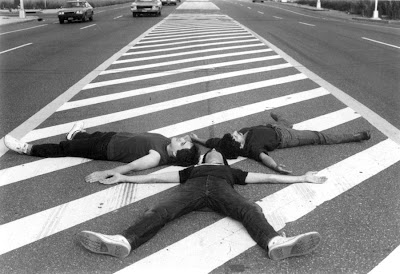 Conspiracy theories are circulating once again as to the legitimacy of the so called "band" who call themselves the Out Of Bodies, after a supposed "death" photo went viral on the internet last week. The photograph appears to show three of it's founding members, Donald Jefferes, Joe Vento and Dan Banic (circa 1986) sprawled out in the middle of College Point's busy 20th Avenue - a well known spot for frequent hit and run fatalities.

Music critics, who've previously grappled with the validity of the band's existence in the first place are now further perplexed as to how this group could possibly have continued to make music well into the 90s after their alleged demise in the late 80s. Conspiracy theories abound - some say while they believe the three may have indeed been dead, it could've been the marketing prowess of the two other Out Of Bodies members Lloyd Goldfine and Mark DeGross who carefully crafted the band's most prolific (albeit postmortem) musical period, through an extensive backlog of unfinished tracks, photo manipulation and hired "look-a-likes".

Forensic experts lean heavily on the side of the story that paints this photo as one of the most ingenious hoaxes of the 21st century. Tyrone Johnson, a graduating student from the John Jay College Of Criminal Justice, has studied the photographic evidence extensively - and without being able to determine any telltale signs of vehicle tire marks, the absence of trauma to the bodies or any signs of blood or entrails has forced Mr Johnson to come to the conclusion, "I don't see shhhheeeeeit!".

Another theory circulating is that out of the three, only Dan survived - and even though he's never discussed the event he did appear to include secret messages in his music video, "Death".


Opposing conspiracy theorists counter-theorize that Dan sings "Death is just a passing in the night", but the photo appears to have been taken in broad daylight. But the original theorists who claim this "Death" video does indeed show Dan's brief addressing of the event, and further claim that so distressed was he at the loss of his two buddies that he actually took the melody of this song and revamped it completely, changing subject matter and mood into the upbeat Out Of Bodies tune "Time Mind", never again referring to it's earlier composition.