The Out Of Bodies - UNEARTHED!

Seems somewhat fitting that this happened on Halloween... like Igor scouring through the graveyard, there I was - digging through the archives - when I came across an old box simply labelled "cassettes". I was expecting to find a lot of home-made mixed tapes, which was the norm back in the early 90s. I used to make tons of them for myself and friends - and yes, there were quite a few of those... but what I wasn't expecting was to hit a vein of long lost Out Of Bodies tapes! What the H - E - double hockey sticks were these doing in here? I thought for sure I had gone through every imaginable cassette I was aware of when I painstakingly compiled the music selections for this website. Then again, an earlier embryonic version of this website would most undoubtedly be much less all-inclusive than what this site eventually became - so it makes perfect sense that I was at least aware of these tapes, but just couldn't get to all of them. I mean - who could?

Where's Elliot Mintz when you need him?

I remember listening a lot to an old radio program called "The Lost Lennon Tapes" where the host, Elliot Mintz (underground radio deejay, publicist, friend of Yoko's) would play super rare recordings from John Lennon's personal collection. He was responsible for listening to hours upon hours of recorded material and then put them in chronological order. His close affiliation to the Lennon's, especially after John's death, made him somewhat of a spokesperson/archivist of Lennon's unreleased recordings and demos. Yoko had personally handed Mintz cassettes that she was finding all over their Dakota home - many hidden away in closets and drawers, unheard by anyone.

Mintz's radio program was almost painful to listen to at times - not just because the author of these recordings was no longer with us - but because Mintz was a stickler for detail - and would talk seemingly endlessly, revealing every subtle reference and backstory to every recording that he would eventually get to (and of course, it was always after a commercial or two) and I can remember many a night laying in bed with my finger on the boom box record button, waiting for Mintz to play the damn song already! He also had one of those voices where every word would be enunciated ever-so-clearly. It was almost a type of Chinese water torture listening to his program - but with all these somewhat annoying aspects I gotta hand it to him - he took an unfathomable huge undertaking and didn't give up. I'm staring at these cassettes now and my eyes are glazing over. Where do I even begin? I'm not going to find "Imagine" in here, for cryin' out loud - I might find a live version of "Doggy Poo", but who's gonna give a rats ass, really?

Wooaaahh! Hold on there fella! Where'd that come from? I'm sure you'll find something meaningful to yourself just based on the fact that you were part of it and it's all kind of exciting to rediscover stuff you've forgotten even existed! Right? Hey why am I suddenly talking to myself? What's going on - - what? Oh.... right... it's Halloween!!

One Step At A Time

Okay, so here's what I'll do. I'll start at the top of the pile and just work my way through it, one cassette at a time. I'll be listening for those special, quirky moments that make this lovable rag-tag bunch of guys as lovable as they are - and when it merits digitizing, that's when I'll pop it in my IONTape 2 PC cassette to digital recorder - and share it with the masses.*

Disclaimer: The *masses* may be just a handful of really bored people surfing the internet looking for something - anything - to be entertained by, such as yourself. No offense intended!

Private (not so private) message to Dan:

Hey, you! I hope you appreciate all this hard work you son of a...

Yeah, we have no idea what's going on here either. 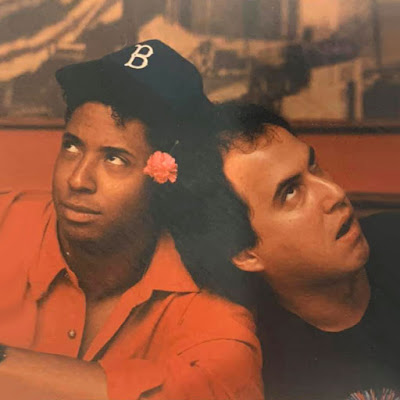 Best guess: Mark and Donald partake of a little Indian Food with a side-order of tomfoolery at Adnan's Indian Restaurant, Brooklyn Heights NY - circa late 80s

(She might've added the flower!)