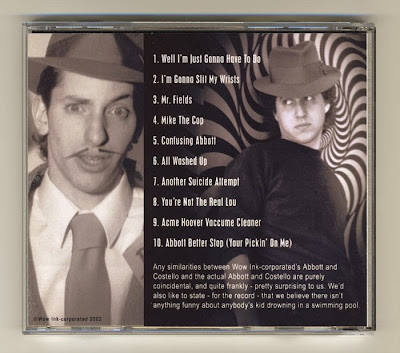 Website UPDATE: A keen eye would notice... gone is the old "contacts" tab, and in it's it's place "SIDES", which in a nutshell is going to be a page devoted to whatever things we may have worked on - individually or collaboratively - that WASN'T what we'd refer to as an Out Of Bodies project.

First up is a very silly bit of nonsense culled from our vast collection of recorded comedy bits, featuring my buddy Lloyd (as Bud Abbott, and other cast members of the old Abbott and Costello TV Show) and myself (Donald) as Lou Costello - or as it's eventually explained, not the REAL Lou Costello, but a cheesy Hanna-Barbera cartoon voice actor filling in for him. Listening to the ten tracks assembled from the many comedy cassettes where these impromptu bits would appear sporadically - you can clearly hear us remembering bits and pieces of the REAL Abbott and Costello story and working them into the premise.

Lloyd and I had always thought it a bit tragic (and yes, funny) that in the sixties the real Budd Abbott was nearly broke and suffered from poor health and several addictions - making it impossible to refuse the offer from the undisputed kings of limited animation - Hanna-Barbera - when they asked him to supply the voice for his own character in the Abbott and Costello cartoon series, which was produced from 1965 to 1966. By this time his comedy partner Costello had already been dead for 6 years, having passed away in 1959. The guy who filled in for Costello was horrible - and predictably so was the whole cartoon.

One day while Lloyd and I were playing around, recording our improvisational bits - we somehow found ourselves mimicking the old Abbott and Costello TV show, whistling the theme song - but for some unknown reason instead of placing ourselves in 1952-1954 when these shows took place - we catapulted the situation to the Hanna-Barbera years - hence the opening lines...

Out Of Bodies SIDES: Wow Ink-corporated's Abbott and Costello